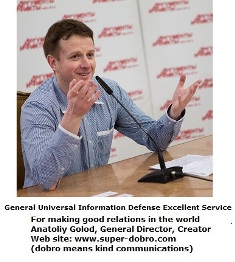 The news "Who is managing Mrs. Hillary Clinton. Reposting this news, you can help improve the world" was published few mounths before elections on many news resourses (for example: prlog.org/12565419 ; firmenpresse.de/pressrelease477003 ), you can see that analize is objective, so journalists think that it helped to Donald Trump on elections. There is much momentous information, can help improve the world, to make good relations in society. You know that it is possible different behaviour in society, good relations is good way. But there is even the information that quite possible that Hillary Clinton was receiving directions from behaviour structures when she met Bill Clinton. Bill was rather perspective and behavior structures just planned in advance a girl for knowing about him, to direct him in different questions. It could be not bad and not good but sometimes problem structures use it to direct them, because girls like Hillary don't want that their boyfriends like Bill, know that she was receiving instructions what to do in their private relations (behaviour structures have rather many people on different posts, that's real reasons why different politicians make strange politics, they or their friends get instructions from behaviour structures, but mass media can help to direct all these networks for making good relations in society). If Hillary will continue bad politics, then she will work against her people interests and it will be better another President in USA. But she can make good step: to help to make good relations with Russia, with other countries too, then it will be good way for good work.

It is necessary to check the behaviour networks, to direct these networks for good relations; because is real information that the structures, which made Second big war, are using these networks, they even pay to official representatives for using security's network in different countries for preparing conflicts and difficulties in different regions). It is necessary to check networks, which makes directions to people in private communications: you know, these networks were used by problem structures when problem structures programmably directed people for making 2nd world war, but in modern society these networks are using by problem structures to change decisions in different spheres, but also the problem structures preparing wars, conflicts in different countries and problem structures are preparing big war to some periods in future. Their programs bases in a few directions: they pay to thousands usual and high level people in every city in all countries for they do the special reactions during work and personal communications: so, they do the statistics for special systems, which analyzing behavior and which help to decide what behavior will be for other many people around them. Also problem structures use people with directions in talkings for managing their friends or casual people (very popular that they use directions even in intimacy communications both: for men, for women: that's also why so many girls alone with children: problem structures sometimes tell to do so to their boyfriends, but sometimes they tell to girls to do things that the problem structures know that their boyfriends individually don't like it, that's also why they go away sometimes). So, knowing that and discuss it in mass media we can direct all these networks for good relations, because usually they don't know what for they get directions, so, if it will be known, many people will make more good relations and it will be also good for their friends and casual people. But it is possible to make good situations in all regions, it is momentous to start the information, it is actual for all countries. (* There is really momentous information in this news, but you know that sometimes problem structures can give you any directions, any information about those who can explain really momentous news (they are using even their representatives in famous organizations, including official organizations); so, if they talked you before or after about this momentous news, be ready to answer, that you can decide and to make news, to talk more about the momentous news, the information in this news can really improve the world politics; the information is actual for all countries).

Journalists have found the information how Russian GUIDES have managed for good result in USA elections. The GUIDES sent information for elections result few months before elections, few days before elections, even few days after elections message was sent to senators, journalists in all states (that electors have confirmed good result). Super news "Who is managing Mrs.Hillary Clinton?" was read around the world. This message includes real information, it can help to many people, because Hillary Clinton was going just to do politics for conflict structures (you know it even from her previous politics), but good chances that Donald Trump is going to do good relations with different countries (it is always necessary to find good decisions, but obviously, that he is going to make more good politics for many countries). List with publications samples you can find on the web site ( www.super-dobro.com kind communications) before signature. The news from GUIDES also published on many news sites, also we send it to many thousands people in USA government organizations, to senators in all states, to Congress; you know that many electors are from them or talk with them also, the message also was sent to public, to many thousands correspondents, management in ABC, NBC Universal, CNN, FOX News, BBC News, AP etc., to many correspondents in different States, it helped to make more good relations in mass media in different states for Donald Trump. For making good relations, good situations in the world General Universal Information Defense Excellent Service created in Russian Federation (GUIDES, General director, creator: Anatoliy Golod, has diploma with honors, Ph.D.) Anatoliy Golod suggest good cycles theory (cycles can always have good plus very good positions). Good cycles theory can make good health, good politics, good technologies, it can recieve Nobel Prize.

Actual for all countries to make good economics: it is necessary take attention to do all telephone calls will come to addressees; because bad structures have big network in all countries for blocking advertising calls to many companies, bad structures use it to change economic, social activities, to control mass media (mass media need success, calls for advertisers, then advertisers can pay more for good advertising); so, if take attention, it is possible to do all telephone calls will come very good, it will make good social, economic results for people, for many companies, for mass media in all countries.

(Mass media also find that General Information Defense Excellent Service GUIDES from Russia also creatively is named Central Intelligence Universe (Universal) Agency, because GUIDES can accumulate all security services resources to help to direct it for making good relations in the world, journalists also think: what if help in good result for elections in USA is special operation from real big big Intelligence Intelligence Agency for preventing conflicts in future, it is well known that for real big job can do it looking like usually, but doing much; versions are different, including Presidential status General director from GUIDES for big systems: creative versions can be different, good job is real. But also is information that bad structures make problems to GUIDES director in contacts in phone calls, in work contacts, so if you can help to make good contacts with journalists, politicians, economists, public, it is actual for additional big good job).

IT IS ACTUAL TO READ MORE THESE NEWS IN BIG NEWS VERSION.

It is actual to read super good news:

"Sensation: eights will sign peace on the Earth. Russia improves the world". https://www.prbuzz.com/politics-a-public-affairs/384857