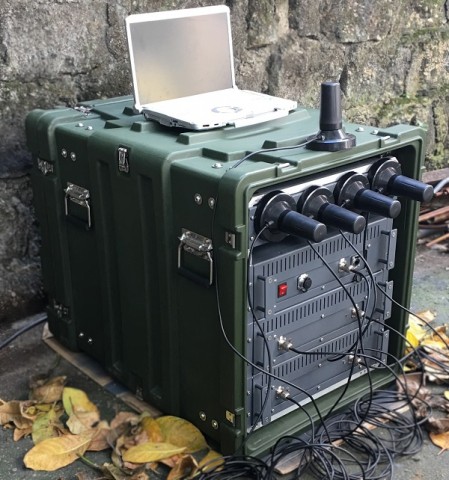 Cost effective, quality signal intelligence, cyber warfare and electronic defence are now available for smaller countries who want to make a difference to the protection of their own forces and their inhabitants.

This company gives them the electromagnetic initiative.

Effective defence of military forces has become a much more complicated endeavour in today’s battle space and will in all likelihood become even more important and complicated in the future. To neglect the electromagnetic spectrum leaves a gap in your defenses, which could be exploited for devastating effect by the enemy.

Threats which pose a clear and present danger to any effective military are the abilities of their opponents to gather signal intelligence (SIGINT) from various sources such as listening in or obtaining information from their radio signals, satellite phones and even cellphones. Not only do fighting forces need to prevent this, but companies like MILITRONIX gives them the abilities to apply the same techniques in obtaining SIGINT from their opponents.

Warfare is about gaining and maintaining the initiative. Companies like MILITRONIX provides their clients superior access to the Electromagnetic Spectrum while denying their enemies that same access.

If a modern effective military force has the ability to intercept messages, break passwords, deliver computer viruses, jam enemy communication, block and transmit translated or self generated GPS coordinates in a target area, deliver its own communications unhindered and secure and deliver drone munitions effectively it has a significant edge. MILITRONIX delivers on all of these.

MILITRONIX has no less than twenty eight products with which to support the needs of its clients and many are customisable. That is twenty eight and counting ways to dominate the electromagnetic spectrum and give its clients the initiative they need in the coming war.

Not only does the range of products delivered by MILITRONIX greatly increase the ability of a client to gain the upper hand in a potential military conflict. It may even prevent such a conflict from occurring as it provides the user with the ability to gain timely SIGINT. This information could in turn be utilised along political and bureaucratic channels to prevent an escalation.

When a military mobilises there is a massive increase in electromagnetic spectrum traffic, which is a sure fire way to signal your intent to your opponent or for you to gain advance warning that your opponent is planning a tactical or strategic move. Units need to receive written instructions followed by addendums to those instructions.

Then there are hundreds to thousands of phone calls and radio messages and just as many unauthorised cellphone text messages from soldier to soldier, which is a problem most militaries have to deal with. MILITRONIX offers ways to block these messages and even send disinformation. An added benefit is that if the sender of the unauthorised message knows they would be identified one would lessen the amount of these messages being sent. Or one could monitor if the cover story your troops have been instructed to use is in fact being utilised effectively.

Computers play a massively important role in any modern military and the ability to effectively utilise these tools without them being prone to hacking and simultaneously impeding the enemy from utilising theirs effectively especially close to D-Day or H-Hour (the day and time of the start of the focus of main effort of an operation) is a significant advantage. Companies like MILITRONIX offers potential clients these abilities.

Drone warfare is a minacious developing area in warfare. If your force were able to detect these weapons up to at least five kilometers away and effectively bring them down or jam them from delivering their weapons packages one could maintain the initiative. In response, MILITRONIX also offers two types of loitering suicide UAV’s, which gives the commander the ability to destroy high value targets.

As warfare developed through the ages the one area which inhibited mankind’s ability to make warfare more effective was operational and tactical communication. Up to World War One we had the machine gun and aircraft, but still we had to make use of things like carrier pigeons and despatch riders to get messages across. Before that we even used smoke signals or signalling mirrors.

The point is that the radio changed the way warfare was waged and was one of the main reasons Blitzkrieg was applied so effectively by the Germans in World War Two, because units could coordinate quickly and effectively with each other. The electromagnetic spectrum made warfare much faster and because it made coordination so easy it can also be utilised to make coordination a total nightmare, especially if applied at the correct time.

Companies like MILITRONIX have identified a critical area where the parity of human beings when it comes to gaining the upper hand in warfare has been prejudiced by attacking and protecting the electromagnetic spectrum. They identified one of the most critical areas in modern warfare in giving their clients the initiative and they have also ensured they do it with flexibility.

Do not teach your soldiers to fight the last day of the previous war, but rather teach them to fight the first day of the next war. Warfare is always progressing. Choose your arsenal with care. The ever-developing electromagnetic spectrum provides an opportunity for all. Do not be the one left behind.

Produce in the Philippines, MILITRONIX specialized in research and development of Electronic Defense product and Solutions.